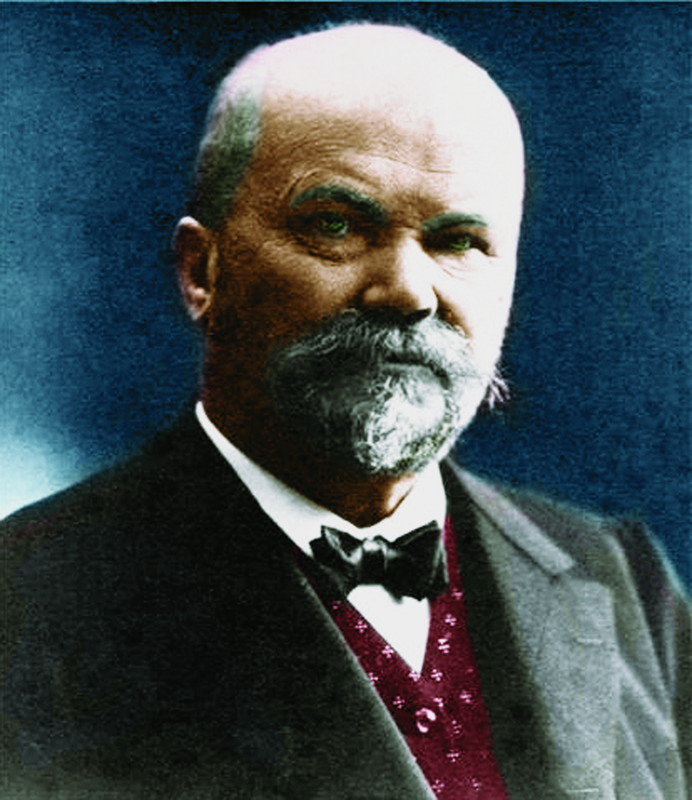 Dr. Tertz born on 30 March 1844, in Prapořištĕ (former Braunpusch), in a tiny village of the Czech region of Bohemia. In that time Bohemia was a part of Austria and from 1867 to 1918 - the Austro-Hungarian Empire..

A very interesting personal story of Tertz that closely connected him to the unusual at that time medical direction, almost unacceptable by official medicine.

Philip Tertz since childhood suffered from rheumatic fever, accompanied by intense pain in the joints that did not yield to traditional treatment. Despite ongoing medical course at the prestigious clinic in Maribor (the Duchy of Lower Styria), the boy's health condition did not improve.

Once, in 1868, he was accidentally stung by several bees and, to his great surprise, since that time the pain in the limbs began to decline gradually and the mobility restored! This personal experience has made him the most memorable impression, but he couldn’t give a reasonable explanation for this phenomenon yet. However, by that time he already knew about clinical researches by Russian physician, Dr. I. Lukomsky conducted in 1864 and based on the therapeutic effect of bee stings. Tertz understood that these studies should be seriously accepted by the world medical community, and he also began to study this issue.

The final push to start the research for Tertz was only after a long 11 years - after he was approached by one of the patients with severe cranial neuralgia and deafness, which did not succumb to the most advanced medical treatments. This woman was ready to use any non-standard technique or procedure.

Tertz recalled his own experience of using bee venom, and suggested the patient to undergo daily bites of bees – up to 90 bee stings per day! Especially in the absence of her allergic reaction to bee venom, the bite could not bring her harm. As a result of this treatment the woman was completely cured of neuralgia and deafness!

Dr. Tertz continued his observations and experiments over the next 10 years, and profound conclusions presented in the University of Vienna in 1889, the successful treatment of thousands of patients! But, despite this, he was faced with a hostile and intransigent reaction of the audience. As a result - the Tertz’s decision to leave Vienna hastily for the exclusion of risk of internment in a psychiatric hospital.

These Tertz findings in those years have not been published, despite the significant evidence base! And before him, by the way, the same fate (and even contempt!) was suffered by Franz Anton Mesmer, Louis Pasteur, Philip Semmelweis and many other prominent researchers.

Tertz decided to return to his native Maribor to continue the treatment of patients with bee venom.

As a vivid evidence of his research work, he left several publications, as well as a book on apitherapy, published in 1910.

In his "Report about the impact of bee stings on rheumatism" (1888) Tertz describes the treatment of 660 patients, who suffered from rheumatoid arthritis. In total, the doctor applied 39 000 bee stings to his patients! Thus the tratment of 544 patients (82%) was totally successful, 99 of them (15%) showed a significant recovery, and only 17 patients (less than 3%) received nzero effect.

Nevertheless, despite the rejection of the Austrian health authorities the results of research of Dr. Tertz, other doctors in France, England and Germany have followed the procedure and confirmed his findings.

Tertz died in Maribor (now Slovenia City) October 28, 1917, in oblivion. He was forgotten not only by his contemporaries. He is not known, and by most of today's doctors, who successfully use his technique. It is enough to say that even today his name does not appear in the press or in specialized European medical encyclopedias! No records of any of the Austrian Academy of Sciences (Austria Akademie der Wissenschaften), or the University of Vienna or at other academic institutions. The only exceptions are Enciklopedija Slovenije (1999) and the Museum of Apiculture Radovljica (Čebelarski Muzej Radovljica). And this material had been twice translated from Slovene sources by the author of the magazine "Doctor Bee"…

Tertz’s personal history does not mean that apitherapy has only a modern history. On the contrary, the facts of another sphere are well-known. For example, the use of bee products for health purposes is mentioned in the Ebers’ Papyrus (1700 BC), in the Torah (Pentateuch), the Prophets and the other books of the Bible, in the works of Aristotle, Pliny, Dioscorides, Galen, Hippocrates, Varro, Avicenna and other ancient scholars. In particular, bee venom is mentioned in the stories of chronic gout healing of Charlemagne (748-814) and Ivan IV the Terrible (1530-1584).