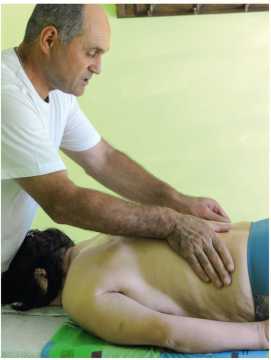 There is no doubt that massage is one of the most effective therapeutic and prophylactic means. It had been existed many centuries and even millennia ago. What lies at the basis of its effectiveness? Apparently, its simplicity and naturalness. It should be immediately noted that it is impossible to consider the massage as some kind of panacea. I am in favor to consider the massage as element of physical culture, or, in another way, a culture of health.

I am deeply convinced, and I think no one will argue that health is the greatest value of human. And all the tools of recovery that have passed the age-old test: massage, phytotherapy, apitherapy, leech-therapy etc., must skillfully and comprehensively be used for the benefit of people.

Having many years of experience as a massage therapist and as an athlete in the past, I have always believed that before you begin the massage, you must carefully examine the patient, assess a level of his physical development and the functioning state of all organs and systems together with the treating doctor.
Based on this, you can pick up certain massage techniques or its variants.
For me it's so much nicer to work (massaging) with a person who has a well-developed muscular-ligamentous system. Typically, such patients have sufficient understanding about their body; they understand the mechanism of action of healing means on him and with such people we have direct connection and feedback. After all, the desire of the patient to improve his health and doctor’s care should, as it is said, beat at one point. And only then a desirable result become achieved at the optimal time. But, unfortunately, in many cases people do not think about their health in time, and if they think about it, then they every time postpones the preventive measures. During the inspection we often have to state the fact that man has serious pathology. The musculo-ligamentous apparatus is very weak, the result is developing of such diseases as scoliosis, osteochondrosis, deformations of the vertebrae, and the most unpleasant - hernia of the intervertebral disc. How to help someone in this situation? After all, almost all people think that now a chiropractor or massage therapist will press in a certain place, it will crunch, and everything will be passed. Of course, this is a misconception. Let me say again, the culture of health is a certain worldview that includes elements such as the ability to select the optimal physical load, to distribute them in time, the desire and the ability to organize your leisure time and to constantly monitor the shape of your body (posture).

I was lucky, because I worked for some time in a traumatology with well-known doctors: Zvarich B. V., Maslennikov A. V., Melnichenko A. S., and learnt a lot from them. Only a good inspection and qualitative X-ray of the problematic spine will allow you to choose the right method of treatment. The reader may think: so what are you a massage therapist or a chiropractor? I am the massage therapist, but doing past-traumatic rehabilitation under the guidance of aforesaid surgeons, I learned the main thing: it is impossible to do the correction (traction) of the spine without making a pre-massage, not relaxing the musculo-ligamentous apparatus.

So, the massage has always been first and available mean to relieve pain and restore physical strength. If you look in the history, you can see that massage has been used from the immemorial times in almost all corners of the Earth, as it is stated in the oldest extant book on massage "Kong fu", which appeared in China in 2698 BC. Massage was very developed and popular in Ancient India. Especially diligently did the massage Brahmins - the priests of the temples. Massage was well known in Ancient Egypt. This is evidenced by the inscriptions on the pyramids, the extant papyruses with the images of doing massage people. From Egypt massage came to Greece. The Greeks were the first to apply it in different types of physical exercise. The art of massage has been distributed to the entire population.

The ancient Greeks were the first to apply the massage in sports. As you know, Greece is the birthplace of the Olympic games. Before the match athletes were bathed, rubbed with oils and massaged. About physiological effect of massage, its application it was spoken and written by the famous Greek doctors: Democritus, Gerodicos, and Hippocrates. Massage was used by the ancient Greeks not only as one of the ways to promote health, but also as a mean of treating of diseases. But, perhaps, the massage art was reached an exceptional  dawn in the Roman Empire thanks to Asclepiad, a prominent Roman physician of the first century BC.

Our massage system, like all others, also has its historical Foundation. For centuries the Slavs who lived in the harsh climate, soared in the baths. However, they "for heighten heat" whipped each other or themselves by the brooms. This whip was nothing but a kind of massage. We will always be grateful to such celebrities as M. Y. Mudrov, S. T. Zabelin, N. F. Filatov etc., for active promotion of medical and preventive massage.

We can safely say that the history of massage is a story of health, strength, beauty.
Massage is definitely useful and healthy for human. Have you ever seen a ballerina, a gymnast or a wrestler rub the joints to give them flexibility and thus efficiency? Flexible joint is resilient and less prone to damage. The massage allows to maintain the mobility of joints, to protect them from possible changes, protects from injury.

It’s very important for uninitiated people to know that the life of a man, like any living creature, is possible only due to the continuous exchange of substances. The blood carries oxygen from the respiratory system, nutrients from digestive organs to the tissues and metabolic products to the excretory organs. It also carries biologically active substances and the information contained in it about the condition of the different organs from one cells to another. If the muscle is at rest, the blood passes through the vessels with difficulty. If you hold a massage on this muscle, the blood vessels fills faster and blood passes through them several times more. This increases stamina, strength, that positively affects on human health.

Massage, which promoting blood circulation, largely facilitates the work of the heart muscle. Acting like a pumping-suction pumps, skeletal muscle under the influence of massage helps to return venous blood to the heart. After all, blood flow significantly reduces during moving through the blood vessels. And we need to help the blood to rise to the heart through the veins again; this help is performed by massage. Particularly large effect is obtained in the flow velocity, if the massage is combined with physical exercises. Massage assists a more rapid outflow of not only the venous blood and also lymph.

As the result of massage it improves supply of organs by oxygen and nutrients, accelerates the removal decay products from the body.

There are a variety of massage techniques, which can affect the nervous system. For example, stroking, shaking, rubbing soothes, relieve pain, and such as squeezing, kneading, effleurage, chopping, pat excite, raises the tone.
I definitely got lucky in the sense that I recently partnered with well-known in Ukraine and abroad as a doctor-apitherapist, CMS, associate Professor of Odessa Medical University Solodenko Yu. N., and we have to pay more attention to honey massage.

About honey massage it is now known quite a lot and it become increasingly popular. Effect of honey massage on the human body has exceptional healing and wellness nature. It is considered that honey carries solar energy. And this is true because, according to experts, bees collect honey exclusively from the sunny side of the flowers, and the shape of the bee honeycombs- the hexagon – is needed for energy conservation. And this energy from the sun, which is concentrated in the honey perfectly assimilated in our organism (body).

According to the arguments of science, the honey in its structure is similar to the composition of human blood plasma, that is, it is physiological absorbed instantly. All the vitamins and minerals contained in honey perfectly assimilated in the body.

Bees, gathering nectar, with a special flair pick only those plants that suit them for certain qualities. Therefore, honey is a true life-giving balm. And in ancient times it was used as a universal remedy for any weakening of the body.

Honey massage at first cleanses the skin intensively and increases blood flow and breathe of the skin. Well, it is equally important, that the honey massage nourishes the skin with many important and essential elements.

Honey has the absorbing effect. Therefore, during the honey massage the honey, penetrating deeply into the tissues of the body, absorbs all the accumulated toxins and as the result after 20 minutes of massage forms a dirty yellow mixture. No other therapeutic or cosmetic remedy cannot give such cleaning effect on the skin. After honey massage the skin becomes crimson, elastic, improves the turgor (elasticity) of the skin. Such procedures even contribute to the dissolution of subcutaneous fat capsules.

It is considered that honey massage has only anti-cellulite direction. No, honey massage, if it is done, usually works out through the whole human body. And duration of this procedure is approximately 2 hours. And this includes so-called preparatory massage, application of warm compresses before switching to a different massaged area of the body, and it applies a nourishing cream after taking a shower.

It is recommended to drink green tea and relax after the honey massage. Healing effect of honey massage is amazing!